You need to know your injuries are covered under the Defense Base Act if you were working as a civilian contractor in Iraq. 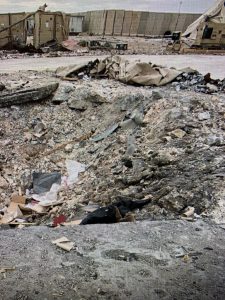 Civilian Contractors Injured in Iraq in the Iran Missile Attack

As a result of Iran’s attack on Al Asad Air Base on January 8, 2020, there have been reports of almost a dozen American troops being wounded in Iraq.

The New York Times reported, “several military personnel who were working were checked for concussions.”

Defense One reported, “about a week after the attack some service members were still experiencing some symptoms of concussion.”

According to Air Force Magazine, as of January 24, 2020, the Pentagon reported 34 service members suffered brain injuries and another 17 sustained concussions.

As of February 10, 2020, the Guardian reports “109 military members have been treated for mild TBI.”

The number of wounded American troops continues to grow in the aftermath of the Iranian missile attack on the United States’ base.

While news media are reporting on traumatic brain injuries incurred by U.S. troops, there has not been much attention to how many civilian contractors working were also injured at Al Asad Air Base during the missile attack. We know there were injuries to contractors because they reach out to us.

Are you a civilian contractor who was working at Al Asad Air Base during the attack by Iran?

Have you suffered a traumatic brain injury (TBI)? or a concussion?

Did you sustain a physical injury to your back, neck, shoulder, or other body part from running for cover or the bombs?

Are you experiencing nightmares, anxiety or depression since the attack? Don’t despair as these are normal occurrences after a bombing.

You need to know your injuries are covered under the Defense Base Act if you were working as a civilian contractor in Iraq.

Defense Contractor Guards currently at Al Asad Air Base include Kellogg Brown & Root (KBR), SOC and a variety of employers. The contractors work as firefighters, ammunition supply specialists, and food service workers. Their work is important to the US troops and we must support the contractors when they are injured.

If you were injured while on Base for KBR, SOC, or another Defense Contractor at Al Asad Air Base during the attack, you are covered under a federal workers’ compensation policy mandated by the Defense Base Act.

Our advice is to report your physical injury or psychological issues and ask for treatment. Keep documentation by sending an email reporting your injury and requesting treatment. You can also report your injuries to the medic on base and/or file an incident report with the employer.

Feel free to email us at