TRAVEL WITH US TO IRAQ IN THIS STORY – PART 1

When we think of Veterans serving our country we usually think of an American-born hero fighting the frontlines in Iraq or Afghanistan. We don’t think of the Ugandan that left their family and everything they knew to fight for our war next to the American soldiers. We don’t think of the Iraqi that risked his life to work with the U.S. Army as an interpreter. They wear the uniform, they fight the grand fight, and they are given American names to protect their identities. They are our hidden heroes, and they are fighting behind the scenes for our country every single day.

In July, I had the privilege of taking a trip to Iraq. I say privilege because it is not an easy country to get into and is not recommended for a U.S. Citizen, due to safety concerns. I spent two weeks in Iraq and was able to submerge myself into the culture and interact with the Iraqi citizens. This experience gave me an inside look on how the war affected Iraq and the state of their country today. It also gave me a new perspective, and I was able to meet a remarkable Iraqi man that had served the U.S. Army as an interpreter. His unforgettable story will be shared in the next part of this series. 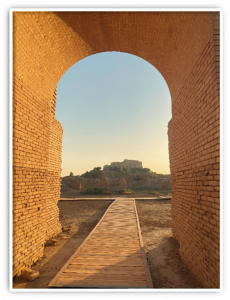 Riding through the streets in Iraq can be overwhelming for an outsider. There’s debris and trash everywhere. There’s also Armed military forces in every corner. The checkpoints are frequent, intimidating, and scary. As a woman, eye contact shouldn’t be made with any male unless absolutely necessary. There are no road laws, so kids are not in car seats and there is never a speed limit. Yet what is shocking to us, is normal for them, and it surprisingly works. The people are all incredible drivers, as I didn’t see a single accident during my time over there. The heavy military presence would make a foreigner feel uncomfortable, yet made the citizens feel safe. There were many places that were abandoned or filled with debris but there were also cities that were beautiful to see. The architecture on the houses was stunning. One could really appreciate how intricately designed most of these homes were. Everywhere you went, you would hear the call to prayer, all five of them. It was a beautiful sound that echoed through the country. One thing that couldn’t be ignored, is how much the war affected the people and country of Iraq. 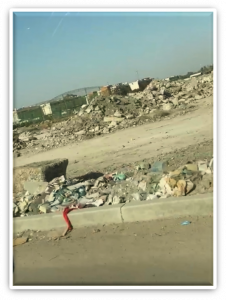 As we drove through Baghdad, the translator was describing how every road had a different story. I remember passing by a round-a-bout and the translator had explained how several years ago, many people were killed right in that spot. He recalled walking amongst the dead bodies trying to find their IDs to get these bodies back to their families. We also came across the remains of a market shop blown up several years prior. This shop had left 400+ people dead. All that was left was an overwhelming amount of debris, broken concrete, and heartbroken families. It haunted me to know that so many U.S. soldiers and innocent Iraqi civilians had lost their lives on this battle ground that is Baghdad, Iraq.

The economy took the biggest hit. The hospitals and medical facilities are run down, and their technology is dated. Quality education was pushed to the side and a college degree is worth next to nothing. This is the place where you can find someone who graduated from Law School, in the streets of Iraq selling cigarettes because there are no jobs. The government doesn’t help fund or support much of anything anymore, so it has left a lot of Iraqi’s feeling hopeless. Electricity goes out every 10-20 minutes and will stay shut off for hours if you don’t have a generator. In a country that is regularly 115 degrees in the summer, not having electricity can be life threatening, but it is what they have become accustomed to. The overwhelming amount of trash that can be seen throughout the country is due to the lack of resources and funding the government has failed to provide. Unfortunately, it doesn’t look like it will change any time soon. 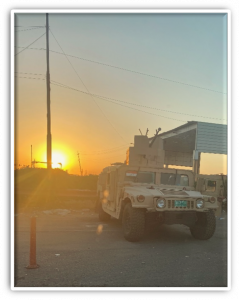 The most remarkable part of Iraq was witnessing the resilience and kindness of the Iraqi people. Everywhere I went, I was provided premier hospitality and greeted with joy. The amount of warmth and the welcoming nature was foreign to me. There is a refreshing sense of togetherness amongst the Iraqis. Everyone was very close to their neighbors and frequently helped each other out. During my second week in Iraq, our car had broken down in the street. In the span of 10 minutes, five different cars including a bus had pulled over to help us and we had all hands on deck. People were so readily available to help, and they didn’t even know our names. I was pleasantly surprised to see a community of people filled with so much love for one another. However, if you ask an Iraqi about how the war affected them, you will notice their face change from joy to distress. The war can be a triggering topic for some, and a topic of exhaustion for most. 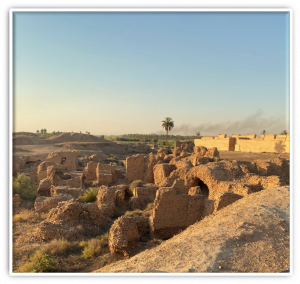 The Iraqi citizens wish to move forward in peace but have been victims of political agendas. Although many wars have come to an end, Iraq remains a battleground today. The citizens of Iraq have been silenced. They live with the thought that it may never get better, so they make the best of what they have. The focus is on family and togetherness. They believe in community and being there for one another because that is all that is left. Families have been left to grieve the loss of their loved ones, their homes, and their livelihoods because of the wars. They believe that all that is left is to cling to those near, love on each other and move forward. In the midst of these Iraqi citizens, are individuals who risked their life to help the U.S. Army. They worked as interpreters or armed security guards and had to work in secret, hoping that no one would know for fear of their lives. On the next part of this series, I will share Moe’s story. One of bravery, loss, grief, and valor. Working at Attorneys Jo Ann Hoffman & Associates has exposed me to countless stories like Moe’s. And it is an honor to help fight for the foreigners who helped fight for us.