The Florida Supreme Court on June 9, 2016 in the case of Westphal v. City of St. Petersburg, Case No. SC13-1976 declared Florida Statute 440.15(2)(a) unconstitutional.  That provision sought to limit disability (lost wage) benefits to an injured worker to only 104 weeks, even though the worker was on a no work status or disabled after the 104 weeks. 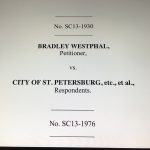 urts.  The Florida Supreme Court said that the injured worker could have 5 years or 525 weeks to receive benefits for lost wages based on an earlier constitutional statute. Those weeks do not have to be sequential.

As such, it is anticipated that the legislature will be making changes to the workers compensation statute.  The Florida Workers Compensation Statute is described in this decision as so oppressive “that the workers suffer in silence rather than fight a system that is so obviously and drastically skewed against them.” Id. at 39.  Our firm is filing more Petitions for Benefits based on doctor ordered treatment to obtain needed relief for the injured worker.