My friend, who is a doctor and an actress with a membership in the Screen Actors Guild, secured two tickets to the  Screen Actors Guild (SAG) Awards and I was invited.  This involved flying to Los Angeles, picking up our two tickets which had our names and instructions on arrival and attendance along with our limo passes to the Awards.  We had to purchase a limo as you don’t want to arrive at the Awards in your Hyundai rental car.

You’re instructed to arrive at the Awards which took place at the Shrine Convention Center in downtown Los Angeles by 3:30 p.m.  You have to be in your seats by 4:30 p.m. as the show begins promptly at 5:00 p.m.  There are yards of bright red carpet flowing from the street where you’re dropped off into the Awards center gala.  When you are dropped off at the red carpet, the people there open your doors and you have arrived!  There are crowds of people in the area of the limousine drop-off and you know when a big star arrives because there’s lots of cheering.

I, along with my friend and other people who were invited, stood along the sides of the red carpet where we would take pictures of celebrities as they passed down the red carpet.  The stars were arriving for about 45 minutes.  You knew when a big star arrived because you could hear the fans that were blocked off on the other side of the street cheering.  A big cheer went up for Oprah, who certainly has a big presence when she arrives and walks down the red carpet.  Rita Moreno arrived and, at 82, would accept her Lifetime Achievement Award.  She certainly had a dazzling outfit on and a wonderful presence as she walked down the carpet.  Morgan Freeman was there as well and received big cheers.

The actors and actresses who walked down the red carpet for the awards are those who are in current movies or TV shows.  Their

attendance supports the show and/or movie they are featured in. It was interesting to see the stars walk by and who accompanied them to the show.  For instance, Michael Douglas arrived alone. Bruce Dern arrived with his daughter, Laura Dern holding his hand and they walked slowly down the red carpet area.  He is older and has a hearing aid.  He has had a wonderful career in movies and television.  Rob Lowe brought his wife and son, who looks much like his father.  Matt Damon, who is short, walked in tandem with his wife.  There were many superb black stars and you could sense that Lupita Nyong’o will be a successful star as she has a presence. Matt McConaughey arrived in lots of makeup.

Once we completed the 100 foot walk to the end of that red carpet there was a tent where we could get our photos taken under the Screen Actors Guild sign.  We then went through another area where again our tickets and ID were checked to make sure we could continue. We then 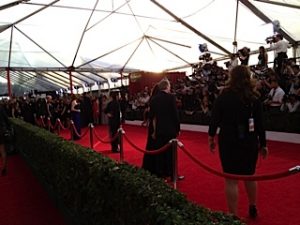 After about another 100 feet of that, we then entered the Shrine convention center.  Our seats were assigned on the ticket.  I was at table 68, seat 6, so when I arrived at the table (via the ushers), I was able to find not just the table but the exact position I would be seated at as there was a name tag with my name on it in front of the plate.  Before, during, and after dinner, there was free good quality liquor and cocktails that were included with the $900.00 ticket price.  Wine (not for me) and bottles of Fiji water were on every table.  Each table sat approximately twelve people and there were tables on three different levels so that even tables at the back of the auditorium could see the stage.  There were two different podiums so that the actors and actresses would go to one podium and then camera would switch to the next podium for the next set of awards. There was a large high screen in the center for an up close view.

It was well organized as a booming voice would advise us, “Take your seats, 15 minutes to showtime” or once the commercial was over, “Begin the applause” and then we would go live.  So it was very fun and well-directed.  There was only one restroom for everyone which meant even the most well-known stars seated at the front of the auditorium had to use that restroom.  So I would be walking right alongside Mariah Carey.  Behind our dinner table and on a lower floor level were areas where they were giving away Loreal lipstick and eyeliner. You could have your makeup done at three locations so that you always looked show-ready.

After the two-hour ceremony, we went next door to the People Magazine awards party. This had a live DJ, an open bar, and tons of great food.  Many of the stars did 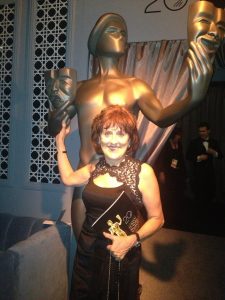 not eat their dinner because to be candid, who would want to be taking a bite of food and be caught with a noodle hanging out of your mouth?  At the party, everyone seemed to relax have fun.  You could eat fried fish, a vegetable plate, fried rice or raviolis, so many people ate at this party as it began at 7 p.m. Los Angeles time. This party went on until 11:00 p.m. Los Angeles time so there was lots of dancing.  Here you had a chance to get your photograph with celebrities.  The winners were holding their awards. When the Breaking Bad group put their awards down, two of the gentlemen that we were near held it up and took their picture with it as though they had gotten the award so we had our photos taken with the award as well, which was fun.

Rita Moreno, at 82, has better arms than I have, probably due to the fact that she works out daily.  She was dancing with her grandson, enjoying and loving music and life.

I had a chance to tell Helen Mirren to keep driving cars because women that love cars need inspiration.  I may have had one or two fabulous cars in my life but I still admire the fact that there is a woman that drives cars, loves cars and paves the way for other women to see that.

What I can tell you from being at the Awards is that I came away feeling that the people in that industry are very nice, very sweet people.  It’s wonderful for instance to see Tina Fey walk down the carpet with her daughter (hopefully another actress who will bring us lots of comedy and joy in the future). The Screen Actors Guild Award supports health insurance and dental insurance for actors and actresses as SAG is only for unionized actors.

We are in a present state where with reality shows, they no longer have to pay actors wages and residuals.  Residuals are something an actor or actress will get even 20 years after they film, if that show is on television – they get the residuals each time that show is on television again.  Those days are largely dying out due to reality shows that are made with people who are neither unionized nor members of the Screen Actors Guild.

It is funny how we relate the actor to his role.  When Steve Buscemi walked by me and said “Hello,” it startled me because he always plays such a bad guy and to be candid, he looks like a bad guy.  He may be a very nice person but we still relate him with that character. 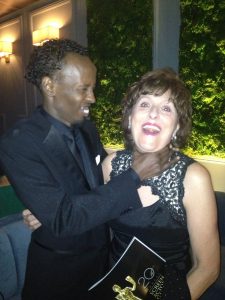 This party was a chance to clown around with some of the actors.  I asked the pirate who kidnapped Tom Hanks in Captain Phillips if he would choke me for the picture and he asked me if I meant for real and I said, “Sure, you’re a pirate.”  So we got a good photo and had a good laugh with that one.  My actress friend that I went with wanted her picture with Bruce Dern so I was able to get my picture with his daughter, Laura Dern.

Having lived in Los Angeles for three months, I always get the feeling it’s a lonely city.  I most admire those that have family because that balance of having family in your life is probably the most important thing.  Many people go into acting because they want to secure praise and secure the love that comes from acting.  It’s an interesting business and I was certainly very lucky to get a chance to get a firsthand look at how things occurred.  I hope you enjoyed sharing my experience and I hope it made you feel like you were walking down that red carpet with me. 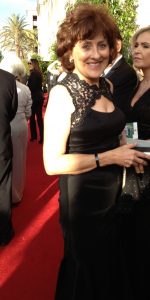