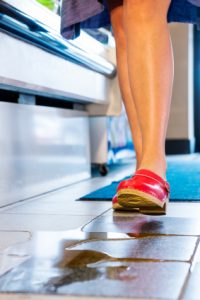 (a) The dangerous condition existed for such a length of time that, in the exercise of ordinary care, the business establishment should have known of the condition; or

(b) The condition occurred with regularity and was therefore foreseeable.

Recently, in the case of Feris v. Club Country of Fort Walton Beach, decided on April 30, 2014, the Judge reversed the lower court’s ruling on whether the defendant country club had notice of a dangerous condition.  In this case, the plaintiff was out with friends and dancing on the dance floor.  There were numerous other people dancing near him who had drinks in their hands and suddenly, Feris slipped and fell on what appeared to be someone’s spilled drink. Feris subsequently filed a lawsuit for his injuries.  The lower court held that the plaintiff failed to show that the defendant had actual or constructive notice of the spilled drink on the dance floor, or that patrons spilling their drinks occurred with such regularity that it was foreseeable that someone would slip and fall.

Feris took the deposition of two other patrons who were dancing that night and both of them said that other patrons had drinks in their hands.  Neither of these patrons knew exactly how the drink and/or substance got on the floor, but they did testify that there was some sort of wet substance on the floor, which caused Feris’ fall.  The trial court held that this was insufficient to put actual or constructive notice on the defendant of a dangerous condition which it had an obligation to rectify.

Feris appealed, and the First District Court of Appeal held that the evidence presented by Feris and some other patrons provided enough circumstantial evidence from which a jury could infer that Club Country allowed or caused a dangerous condition to exist or that the condition existed with such regularity that the defendant knew or should have known of its existence. It is important to make clear that none of the testimony elicited by Feris in the depositions of the other patrons established exactly how the liquid that Feris slipped on came to be on the dance floor.  However, the First District Court of Appeal held that because the defendant’s policy was that of not allowing drinks on the dance floor, coupled with the deposition testimony that most of the patrons were indeed holding drinks, that should have placed the defendant on notice of a dangerous condition.

It is important to contact a qualified attorney who can assist you with your slip and fall claim.  If you were involved in a slip and fall accident at a business, contact the law offices of Attorneys Jo Ann Hoffman & Vance B. Moore, P.A. and set up a free consultation.