In many instances, a psychological injury will occur over time as a result of working with multiple employers in a war zone.  Which employer ends up liable will usually be the Last Employer even though there was minimal psychological trauma during that employment. Let’s look at how the courts have typically analyzed this issue.

Psychological claims that occur as a result of cumulative exposure to harsh and dangerous working conditions such as the hazards of working in a war zone are designated as an occupational disease.  Specifically, courts have defined an “occupational disease” as a disease caused by hazardous conditions of employment, which are peculiar to the employee’s employment as opposed to other employment generally.  Hazardous activity need not be exclusive to the particular employment, but it must be sufficiently distinct from hazardous conditions associated with other types of employment.  Gencarelle v. Gen. Dynamics Corp., 892 F.2d 173, 23 BRBS 1 (CRT) (2d Cir. 1989), aff’d 22 BRBS 170 (1989). 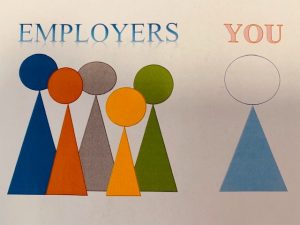 In cases involving multiple traumatic injuries, the responsible employer/carrier issue turns on determining which injury resulted in claimant’s disability. Section 20(a) aids claimant in establishing entitlement and does not aid either employer in proving that the other is liable. Establishing the responsible employer therefore involves weighing the relevant evidence and determining whether the disability is the result of the natural progression of the initial injury or an aggravation due to the subsequent injury. Each potential employer bears the burden of persuading the fact-finder that its evidence is entitled to greater weight. In the unlikely event that neither employer is able to persuade the administrative law judge that its evidence is entitled to greater weight, the purposes of the Act are best served by assigning liability to the last employer. Buchanan v. Int’l Transp. Services, 31 BRBS 81 (1997), and 33 BRBS 32 (1999), aff’d mem. sub nom. Int’l Transp. Services v. Kaiser Permanente Hospital, Inc., 7 F. App’x 547 (9th Cir. 2001); see Marinette Marine Corp. v. Director, OWCP, 431 F.3d 1032, 39 BRBS 82 (CRT) (7th Cir. 2005) (administrative law judge properly addressed the liability issue based on the record as a whole without reference to Section 20(a)).